The port industry’s ability to evolve with the world’s rapid economic globalization proves the need for continuous diligent maintenance.  With increased growth in average shipment size, volatile environmental conditions, and increased productivity, it is more imperative than ever to ensure optimum container port conditions.

Coastal landowners understand the importance of erosion control.  They do today, and they have for thousands of years.  Human history is full of examples of efforts put forth to stop the natural effects of wave action and coastal flooding.  Constantine I is credited as the ruler behind the ancient seawalls in Byzantium, some of which are still visible today.  Yet, for as long as humans have built structures to keep the water out, water has been finding ways to creep back in.

URETEK Deep Injection® (UDI) is the rapid, economical solution for the repair and maintenance of America’s ports so that maritime shipment is as safe and efficient as possible.  The URETEK Method and material represent the ideal solution to the port’s paving maintenance and repair issues.

Land and water interact in complex ways to erode, extend, and reshape the earth. For waterfront homes, communities, and public infrastructure assets like ports and ferry terminals, this interaction can sometimes lead to disastrous consequences.

Paving: Large amounts of freight from busy container ports can result in continuous heavy wear and tear on their concrete paving. In addition to the incredible loads, the facility, being located along the ship channel, suffers from poor and unstable subsoil, which further stresses the concrete systems. This, along with water penetration below the slab thru expansion joints, can cause paving failure.

Over time, the massive tonnage accrued by behemoth cranes on sight like straddle carriers wreak havoc on terminal drive lanes as the heavy loads that the crane tires absorb create a linear depression in the well-used pathway. This situation creates a potential topple hazard from improper drivelane and sedimentary stacked containers, potentially causing severe accidents that lead to the loss of cargo, the loss of lives, as well as the environmental hazards it can cause.

Seawalls: Among the biggest threats to seawalls is the natural phenomenon when waves, tides, and storm surges come into contact with them. Because seawalls do not absorb the energy that waves, tides, and storm surges bring with them, that energy is typically directed downward and sideways. This downward-directed energy scoops out the soil at the base of the seawall in a process called scouring.

Over many years, this natural scouring process can undercut the bottom of a seawall and lead to minor shifts in the wall, which cause separation of the walls’ joints. These joints then allow water to travel through resulting in loss of fines and subsequent subsidence of the soils for which the wall supports. As we know all too well, when water comes in, soil goes out!

Many of our nation’s most important coastal assets are protected by seawalls, some of which have fallen into serious disrepair. These assets are threatened when the long-term effects of scouring are manifested in the form of sinkholes and weak soils behind them. To learn more about our seawall foundation & infrastructure repair services, contact us now.

URETEK routinely begins each new highway pavement preservation job with on-site Dynamic Cone Penetrometer (DCP) testing, which is used to measure the comparative strength of the base soil layers beneath roads, airport pavements, and bridge approach/departure slabs. This information is used to determine exact locations and levels for the injection of the polymer material used to strengthen and densify problem soil strata.

On subsequent scheduled appointments, URETEK crews return to complete work on any additional track that may suffer from the same issues. The polymer expansion reaches 90 percent of its full compressive and tensile strength within approximately 15 minutes.  Because the polymer material is extremely light, any additional overburden weight is kept to a minimum.  The properties of URETEK’s polymer material is carefully matched to typical base material compressive strength characteristics.

The URETEK Method and URETEK material represent the ideal solution to the port’s paving maintenance and repair issues. Not only is the paving lifted very accurately back to it’s intended elevation, but it is also re-supported on a bed of strong, dense, long-lasting material that will not decay or deteriorate over time. It’s also important that the hydro-insensitive and hydrophobic material seals to the underside of the slab, thus blocking out water intrusion thru the joints and under the slab, so “pumping” is eliminated.

URETEK’s geopolymer is an ideal solution for busy ports across the country.

The injection process is repeated, using a gridwork of hole locations until the entire area is sufficiently filled and sealed by the polymer. If the road, runway, or panel also needs to be leveled or raised, this is achieved through further monitored injections. Call us now to learn more about our port & shipyard maintenance solutions.

UDI involves the injection of a structural polymer into base and subgrade soils to increase their load-bearing capacity.  This is achieved by injecting the polymer through small holes drilled directly through the soil substructure to depths determined by site-specific analysis.  URETEK’s proprietary high-density polyurethane foam (HDPF) polymer material flows easily into voids and weak zones within the soil mass below. Then, through a controlled chemical reaction, the expanding polymer compacts surrounding soils, increasing their load-bearing capacity.  The composite material quickly cures into a strong, dimensionally stable, environmentally inert, non-toxic, and water-resistant geo-material that provides years of reliable service.

UDI requires no excavation, and projects can often be completed in hours or days. Traditional repair methods often involve excavation, and the time required for project completion can be weeks.

URETEK’s 486 Star polymer is specially formulated for stability and strength, even in the harshest environments. Our polymer is hydro-insensitive, and UDI is warranted against loss of dimensional stability or deterioration.

URETEK’s 486 Star polymer material has been used to successfully complete over 100,000 projects nationwide. The lightweight, expansive geo-polymer material not only realigns concrete pavement but also addresses the problem at the source – weak soil composition – giving customers a long-lasting solution.

Unlike other repair methods, UDI is minimally disruptive and requires no excavation.

Liability risk is greatly reduced with UDI due to an inherently safer working environment without deep excavation or heavy equipment. The process and material are eco-friendly and meet today’s high environmental standards.

Port Systems and Seawall Repair Depend on UDI

For track maintenance, time truly is money. For example, should repairs require the shutdown of a main track or branch line, traffic must be either diverted or stopped until the repair is complete. When rail traffic comes to a halt, associated costs in man-hours, re-crews, and fuel consumption can greatly affect a carrier’s bottom line.

The same is true for portions of track where erosion or water intrusion has weakened sub-soils resulting in settlement. Long term slow orders due to settlement and slow train traffic affecting train handling and fuel consumption both impact the bottom line. When track speed is reduced due to poor roadbed conditions, other factors such as prolonged rain or flooding can cause erosion or failure of an already compromised roadbed. Such cases can result in a catastrophic train derailment, a massive expense for rail system operators, and a serious matter of public safety.

URETEK can restore the integrity of rail beds, repair crossings, and stabilize culverts and bridge abutments with no requirement to take tracks out of service for extended periods. Our ability to clear work areas, allow train traffic to pass, then return to work immediately keeps operations running with minimal interruption.

For over 30 years, URETEK has been a trusted, reliable partner for DOT officials in charge of ferry terminal maintenance and repair, city officials with seawall concerns, and private property owners with shoreline erosion issues. Our URETEK Deep Injection® (UDI) application is the perfect solution for coastal structures showing the signs of failure due to erosion. With its rapid response and experienced crews, URETEK is the vendor most prepared to complete emergency seawall repair and standard maintenance tasks on time and on-budget.

When we arrive, our crews get right to work on a site-specific repair or maintenance solution that quickly mitigates weak soil issues and extends the reliable working life of important assets. Best of all, our zero-excavation solution means the work is completed in days, not weeks or months. When the job involves stabilizing base and subbase soils and restoring critical rail systems to their optimal functional state, nobody does it better, or faster, than URETEK.

Contact URETEK today to learn more about our speedy pavement maintenance and repair solutions that keep budgets in line while assuring many more years of reliable service from important roadways. 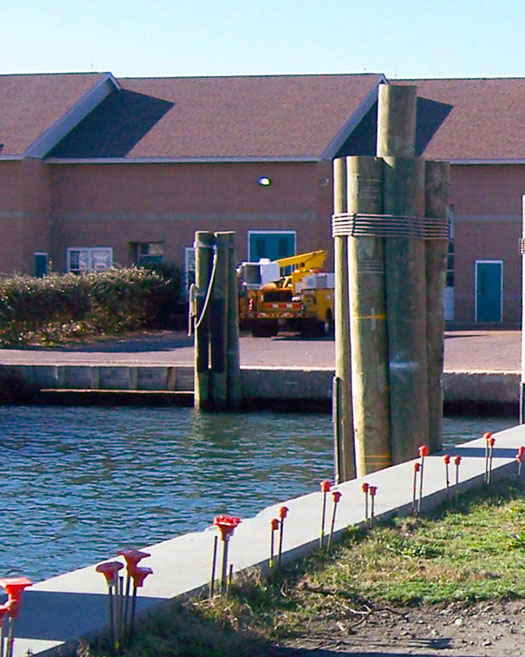